Can you believe it? The expansion project is well underway and is quickly approaching completion. If you have not been in the library recently, you will be SHOCKED at how the interior space has changed, most especially in the new Teen and Middle School Departments. I hope you like BRIGHT GREEN, because we sure do!

The library will be closing from September 18 to September 30 so that we may move the Childrenʼs and Teensʼ collections from their temporary home in the Adult Department back to their respective areas.

Harry and Ginny Potter's youngest son is enrolling in Hogwarts????

Let's hope by now that you all know that the newest Harry Potter adventure is being released THIS Sunday, July, 31! A departure from the other books, this is actually a rehearsal script of a new play written by Jack Thorne based on an original story by J.K. Rowling. The play's world premiere will be in London's West End on Saturday, July 30, 2016.

At the beginning of the play, we find a familiar scene repeated for generations. Harry and Ginny are on Kings Cross platform 9 3/4 to see their youngest son, Albus Severus Potter, off to Hogwarts for the first time. Ron and Hermione are also on the platform to see their daughter, Rose, off to school. She can’t wait to board the train. She’s gregarious and quick to laugh—so much more confident than the nervous Albus. 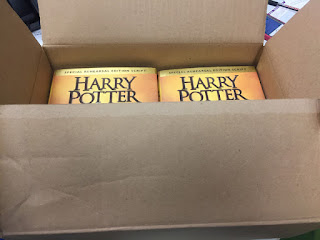 
If you aren’t familiar with Kahoot! already, there will be a warm-up demonstration before the actual contest begins.  The winner will receive a copy of “Harry Potter and the Cursed Child,” which is being released on July 31, 2016. Participants must bring their own devices – anything that has an internet connection. Refreshments served. Registration required. You may register in person, online or by calling 860.673.3331. Space is limited to 40.

The release of this book has brought up the question among some about the whole concept of fictional characters aging. I have mixed feelings about the huge gap in Harry's life for this new release. On the one hand, I wonder what Harry's 20's were like, while on the other hand I like skipping to the next generation of familiar faces attending Hogwarts, as the series really is about the institution itself. I just came across this really interesting article on The Guardian's website about this topic with several well-known authors -- including Anthony Horowitz, Cressida Cowell, Charlie Higson, Francesca Simon, and  Michael Rosen -- offering up their opinions. What do you think? Should fictional characters grow up? 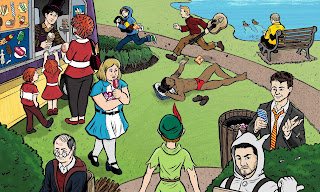 That's all for now.
Peace out, Butterscouts.
-Miss Sara

The 2017 Nutmeg Nominees were announced today. Did you ever wonder who picks out the books that are on the Nutmeg Book Award Nominee Lists each year? According to their website, each Selection Committee has a maximum of 15 members including: 1-2 chairpersons, 1 reading teacher, and a mix of school and public librarians. The Intermediate, Teen, and High School Committees also has 2-3 student readers.

It is with great pride and pleasure that I am able to share the experiences of Burlington's own Meghan C., who was a student reader on the 2017 Nutmeg Awards High School Nominating Committee. Meghan is a junior at Lewis S. Mills, where she excels academically, and is a very active member of the Burlington Public Library's Teen Advisory Council. 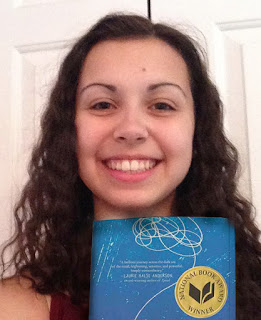 Q How did you hear about the Nutmeg Student Reader position?

A Our wonderful Teen Librarian, Sara Lo Presti, told me about it and I was immediately interested. Before then, I had no idea that students could be involved in the selection process at all. (Editorial comment: Awwwwwww. Thanks, Meghan!)

Q Was it hard to apply?
A Not at all; all I had to do was fill out an online application, write an essay explaining why I wanted to take part, and provide a reference from a librarian or teacher.

Q How many books did you have to read?
A In total we read about 80 books over five meetings; and discussed anywhere from 15 to 30 books per meeting.

Q What were meetings like?
A We met at the Public Library in West Hartford in a conference room. It was very casual; we all sat around a table, discussed the books we’d read and then voted on whether or not to keep it in the running to be a nutmeg book. We had four two-hour meetings and our last meeting was three hours long, but the time really flew by. It felt exactly like talking about books with your friends. 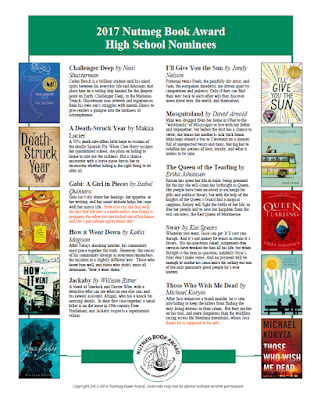 Q Okay – be truthful – did you REALLY read them all?
A Well, I did read most of them eventually, but not all in time for the meetings. And I’ll admit that there were a few that I started and abandoned; I figured if they couldn’t hold my interest at the beginning, they weren’t going to end up on the list anyways.

Q Were there books that were just awful??? Are there books you really wished made the list?
A There were definitely some bad ones (they can’t all be good I guess) and most were just okay. Most of the ones I really loved were favorites in the group, so they made the list, but a few weren’t able to be Nutmegs because they weren’t going to be available in paperback in time.  I hope that All the Bright Places will be in the running next year!

Q If you had to choose, what was your favorite title that made it on the list?
A It’s so great to FINALLY be able to tell people what made the list!!! I would have to say that my absolute favorite was Challenger Deep by Neal Shusterman. It almost didn’t make the list because of complications with publishing, but thankfully Mr. Shusterman stepped in to save the day! 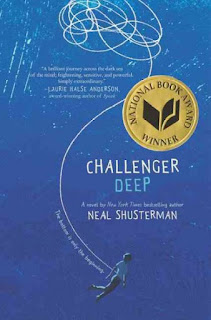 Q Is there anything else you want to tell us about the experience?
A This was probably one of the best things I could have done; it was a great opportunity to read books that I normally would never have even considered and to meet a ton of different people who loved books just as much as I did. I would absolutely recommend this to anyone who loves reading and can handle reading a lot of books in a short amount of time. You definitely have to be good at managing your time.
All things considered, I think that this was a really great experience. I really loved having the opportunity to have a part in deciding what books people my age are recommended to read, and I would do it again in a heartbeat.

View a complete list of all the 2017 Nutmeg Nominees here.

YA Authors Take On DC Comics

Mashread exclusively reportedly on March 31, 2016 that four top YA authors will be penning full-length novels starring DC's most iconic characters. The lineup includes Leigh Bardugo (The Grisha Trilogy) on Wonder Woman, Marie Lu (The Young Elites) on Batman, Matt de la Peña (Mexican Whiteboy and The Living) on Superman, and Sarah J. Maas (The Thrones of Glass series) on Catwoman. The novels will be released in that order, starting in August 2017.

I wonder how this is going to work out for the hardcore DC comics fans. I know you've been mostly accepting of the movie adaptations, but those still include the visual elements that you find in graphic novels and comic books. While a straightforward novel seems, well, novel, I am not sure if it is such a good idea. I mean, if it were, wouldn't it have been done by now? I am sure there have been attempts before, but it's not like comic-based novels are flooding the market.

I AM pleased to see that DC Entertainment, Warner Bros. Consumer Products, and Random House Books for Young Readers have chosen such renowned authors to undertake this project. It gives me hope that the novels will at least be well crafted. Still and all, it will be interesting to see how they are received by true DC comics fans. I personally have my doubts that they'll be a smash hit. I guess I'll have to revisit this topic in August of 2017!

Peepshi? I don't think so.

RIGHT. Making sushi out of Peeps®. It looks so easy. The end result looks so cool. Aren't they just the cutest things ever??? Makes you want to run out to buy a boatload of Peeps and get started this afternoon. 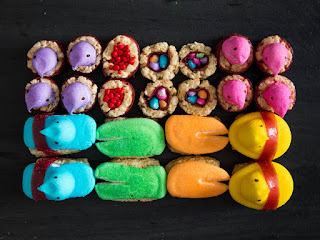 WRONG. Ask ANYONE in TAC and he or she will set you straight. Peeps are the most uncooperative crafting material ever. EVER. Did I mention ever? Literally 9 months later, they were still squishy and not dried out from our epic fail to enter a diorama into the Washington Post's annual Peep Show contest last year. Just back away from the Peeps with your X-acto blade in the air and no one gets hurt.

Fine. You want to live dangerously? Don't  say I didn't warn you. Peepshi directions are here.

The far better way to deal with Peeps is by looking at the winners of the 2016 Peep Show. And bow down to their creators. This year's winner is "A Peep Inside (Out) Donald J. Trump." 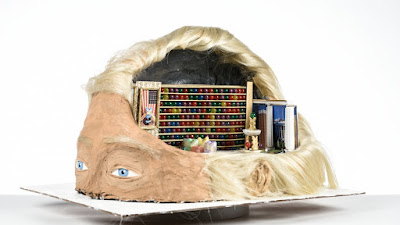 Or, better yet, just bite their little heads off and enjoy. 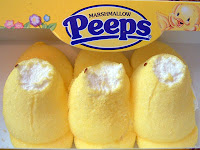 Peace out, Butterscouts -
Miss Sara, aka Bubblegum Zombie Eternal
Posted by Miss Sara at 10:26 AM No comments:

How incredibly funny. To prove how much I don't read MANGA, the whole last post was about MANGA, not ANIME. I have driven around for the past 36 hours fearing that I had made this mistake. So, even bigger apologies to the MANGA followers out there. Today's apology includes the purchase of Volume 14 and 15 of Blue Exorcist. Please forgive me. (Hangs head in shame.) 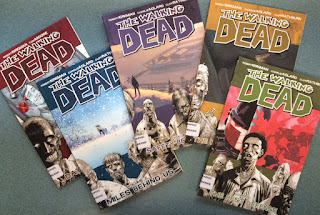 I do appreciate those of you who have dared to participate in the ANIME Series Naming game from the previous post. (Insert eye roll and smiley face here.)

Peace out, Butterscouts.
Once again, I remain -
Bubblegum Princess X (My maiden name series)
Bubblegum Zombie Eternal (My married name series)
Posted by Miss Sara at 7:31 AM No comments:

What is your Anime Series Title???

Okay. True confessions. I do not read Anime. It's not my thing. Maybe it is the whole reading back to front concept? Maybe it is just too many characters to keep track of? Maybe it is that whole alternate universe thing? Maybe it is all those overly big eyes? Whatever the case, I just don't read it. I try like heck to buy some titles now and then when my informants clue me in, but, I admit, it isn't always on my radar.

So, as my apology to the Anime fans out there, I am sharing this funny Anime Series Title generator that was posted today on Baker & Taylor's website. THIS I understand. And find funny. Give it a whirl and share YOUR Anime Series Title. 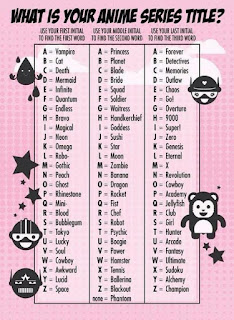